CLEVELAND-- The Ohio Attorney General's Office announced a lawsuit on Wednesday against the nonprofit organization Cops for Kids.

The suit accuses the group's organizers, Thomas Duffy and Charles Hitzel, of Ashtabula, of defrauding and misleading donors.

In the suit, the attorney general's office asked the court to stop Cops for Kids from soliciting in the state of Ohio and to redistribute the assets collected. Ohio Attorney General Mike DeWine said they also want the telemarketing company Telcom Enterprises to withdraw from solicitation activity in Ohio.

"We believe that the evidence will show that the defendants misled donors and put their interests above the charitable mission they claimed to support, while collecting millions, millions of dollars from unsuspecting generous Ohioans," DeWine said. 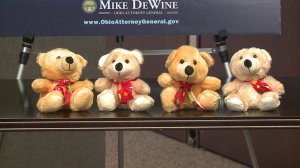 Cops for Kids claimed to benefit youth in Ohio, build relationships between officers and children, and provide funds for scholarships and recreation programs, DeWine said. It also offered a program to give teddy bears to cops to hand out to kids who experienced traumatic crimes.

According to the attorney general, Cops for Kids would send a box of four teddy bears to police departments in cities where it planned to solicit next.

Cops for Kids received $4.2 million from donations between 2005 and 2015. DeWine said nearly 80 percent of that money went to fundraising fees, while the two men running the nonprofit received more than $600,000 in salaries.

About 2 percent, or $74,000, actually went to charitable causes, according to DeWine. He said of a $100 donation, about 80 cents would go to benefiting children.

Attorney General DeWine, who called this a sad story, said he hoped this would not stop people from giving to charity this time of year. He offered the following tips:

WINTER PARK, Florida (CNN) -- Sarah Boone faced a judge this week to answer to charges of second degree murder in the death of her boyfriend.

The judge ordered her held without bond. She could face life in prison if convicted.

KILLEEN, Texas (CNN) -- Parents, have you ever asked your kiddo to do something or behave properly and they've ignored you? Yeah, you're not alone.

To combat that behavior, one Texas mom had her son drop down to pushup position in the middle of a shopping trip at a craft store.

SYDNEY, Australia (WJW) -- When the staff at Small Animal Specialist Hospital in Australia showed up for work on Monday, they had no idea what they'd be faced with that day.

A family brought their 18-year-old female python named Monty into the hospital after she swallowed a beach towel.