Reese was an employee at the bar and restaurant, located at Larchmere Boulevard and East 128th Street in Cleveland. The Cleveland Division of Police said he and the two suspects were working in the kitchen Saturday night when there was an argument. Reese was stabbed and taken to University Hospitals Cleveland Medical Center, where he was pronounced dead.

“I just want to say this is the most senseless thing I have ever witnessed in my life. My son was a very good young man,” said Pamela Woodall, Reese’s mother. “He wouldn’t hurt a soul. He wouldn’t kill a fly.” 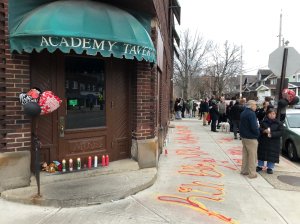 She described her son as loving and caring. He was a musician who loved to cook and was dedicated to his job. Woodall said customers enjoyed seeing him because he could have a conversation with anyone.

In front of the tavern, mourners lit candles and wrote his name on the sidewalk.

The two suspects were treated for cuts and arrested.

CLEVELAND – Cleveland council members are reacting with strong words about how the protests erupted in downtown Cleveland and how prepared the city was to handle it.

CINCINNATI, Ohio (WJW) — An Ohio animal hospital is looking to help horses that were injured during the police violence protests this weekend.

Demonstrators across the nation took to the streets in response to the death of George Floyd. He died Monday while in Minneapolis police custody.

LOS ANGELES (AP) — The mayor of Atlanta, one of dozens of U.S. cities hit by massive protests in recent days, has a message for demonstrators: “If you were out protesting last night, you probably need to go get a COVID test this week.”

As more beaches, churches, schools and businesses reopened worldwide, civil unrest in the United States over repeated racial injustice is raising fears of new coronavirus outbreaks in a country that has seen more infections and deaths than anywhere else in the world.