Grate already faces decades in prison after pleading guilty to some of his charges. He did not plead guilty to several other charges including  kidnapping and aggravated murder for which he was found guilty on Monday. He could face the death penalty.

The sentencing phase is expected to begin on Friday, May 18. 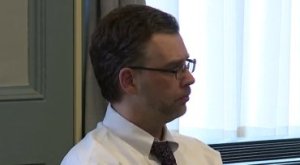 He is accused  of killing 29-year-old Elizabeth Griffith and 43-year-old Stacey Stanley.

Grate was arrested in September 2016 after police found the women's remains in what was supposed to be a vacant Ashland home, where another woman said she had been held captive.

Once in custody, Grate, 41, told police that he had killed two other women but he has not been charged in those killings. Police also looked into whether he was connected to the 2015 death of a fifth woman.

LAKEWOOD, Ohio (WJW) -- The Cleveland Browns loss in the second game of the playoffs to the Kansas City Chiefs is bittersweet.

Fans like Tyler Pike who were able to be there in person told us about the moment during the long drive back after the game.

WASHINGTON (AP) — U.S. defense officials say they are worried about an insider attack or other threat from service members involved in securing President-elect Joe Biden’s inauguration, prompting the FBI to vet all of the 25,000 National Guard troops coming into Washington for the event.

The massive undertaking reflects the extraordinary security concerns that have gripped Washington following the deadly Jan. 6 insurrection at the U.S. Capitol by pro-Trump rioters. And it underscores fears that some of the very people assigned to protect the city over the next several days could present a threat to the incoming president and other VIPs in attendance.

CLEVELAND (WJW) — The Cleveland Department of Public Health reported 162 new cases of COVID-19 in the city today. There were no new fatalities from the virus reported.

Since the coronavirus pandemic began, there have now been 22,124 reported cases and 206 fatalities in the city.

No incidents reported as armed protesters gather at Ohio Statehouse

3 things Donald Trump may do after leaving office Wednesday