CLEVELAND-- Cleveland police on Friday released a photo of the person they say is wanted for trying to abduct a teenager on Tuesday.

They are trying to identify the suspect. 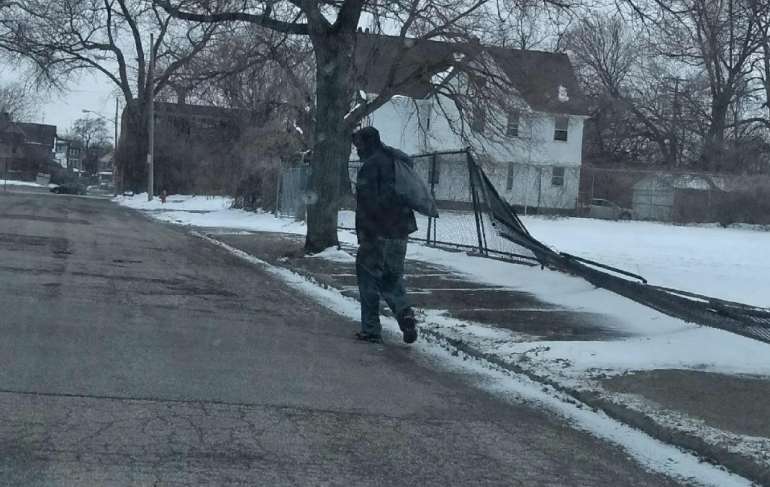 John Hay Early College High School student, Amirah Wilson, 15, was walking on East 81st Street at around 8 a.m. Tuesday to catch the RTA Healthline, only a block away on Euclid Ave., when she noticed  the “scruffy” looking man.

“He seemed off like something was wrong,” Amirah told FOX 8's Suzanne Stratford.

She usually walks with her brothers, but was unable to that day.

She tried to avoid the man, but says he quickly attacked and grabbed her by the neck.

The man began dragging Amirah toward the back of a home, which is partially hidden by a fence.

Amirah’s mother, Talibah Ahmad, had always encouraged her daughter to fight back and that’s exactly what she did.

Amirah kicked the man as hard as she could in the groin and then ran back to their apartment building.

Amirah ran inside and slammed the door just in time, as the man ran up to the building.

Her mother called 911 and police began searching for the suspect who had a scruffy salt and pepper beard and was wearing a dark hoodie and jeans.

The entire family is still traumatized but speaking out to warn other parents and children to be extra careful.

Please call Cleveland police if you know anything about this incident or can identify the suspect.

Read more, here. Watch Suzanne Stratford's report from earlier this week in the video, above.

ROCHESTER, N.Y. (NewsNation Now) — Two people were killed and 14 others were injured in a shooting at a backyard party in Rochester, New York, early Saturday, according to police.

The Rochester Police Department said that the shooting occurred near Pennsylvania Avenue in the early hours of Saturday morning, NewsNation affiliate WROC reported.

(WKBN) - Drivers are being warned to use masks on their faces and not as a car decoration.

AAA suggests not hanging the mask from the rearview mirror as it can block the view of the windshield. According to AAA, that's a safety hazard, because it puts the driver and others in harm's way.

MINNEAPOLIS (NEXSTAR) -- A two-hour city council meeting on the future of police reform in Minneapolis turned into a hearing with the police chief about what can be done to stop a rise in violent crime.

In June, nine members of the council said they were looking to "dismantle" the existing police force and replace it with a different public safety model following the death of George Floyd in police custody. But just months after that effort, members of the same council are wondering why their constituents are complaining about a lack of policing in the city.

City of Cleveland notified of 14 more confirmed cases of COVID-19, no new deaths

‘Thank you for everything’: Man battling COVID-19 texts mom before going into coma

Second stimulus checks: Where we stand after Trump’s push for new direct payments