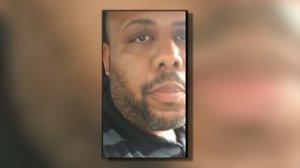 CLEVELAND– The Cleveland Division of Police is asking residents in surrounding states to be on alert for the suspect accused of killing a man on Facebook.

Police said 37-year-old Steve Stephens is wanted for aggravated murder in the death of Robert Godwin, Sr. The shooting happened on East 93rd Street in Cleveland Sunday afternoon and was posted on Facebook.

Cleveland police said those in Pennsylvania, New York, Indiana and Michigan to watch for the suspect. He may be out of Ohio at this time, police said.

Despite claims of killing more than a dozen, Cleveland police said there is only one known victim at this time.

Stephens is considered armed and dangerous. Anyone with information should call 911 immediately. Out-of-state residents should contact their local authorities.

Continuing coverage on this story here

Cleveland parents looking for justice after son run over, killed following I-90 crash

CLEVELAND (WJW) - A Cleveland family is searching for justice after their son was struck and killed on a local interstate.

He was involved in an accident that threw him from his vehicle into oncoming traffic and was run over by a car that just kept going.

CANTON, Ohio (WJW) — Canton police are investigating after a man was shot and killed Wednesday afternoon.

Authorities were called to a home at the 1300 block of Diana Place Northwest around 12:45 p.m. for reports that someone had died.

WASHINGTON (AP) — The Senate narrowly approved a resolution Wednesday to nullify the Biden administration's requirement that businesses with 100 or more workers have their employees be vaccinated against the coronavirus or submit to weekly testing.

The vote was 52-48. The Democratic-led House is unlikely to take the measure up, which means the mandate would stand, though courts have put it on hold for now. Still, the vote gave senators a chance to voice opposition to a policy that they say has sparked fears back home from businesses and from unvaccinated constituents who worry about losing their jobs should the rule go into effect.

COVID-19 in Ohio: Transmission rates remain high in every county with hospitalizations only going up