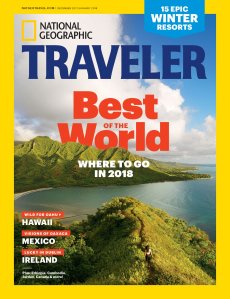 That’s right — the city of Cleveland has landed on National Geographic Traveler’s list of 21 must-see places to visit in 2018. It’s one of only three spots in the U.S. on that list.

“The travel story of our time is about American urban renewal,” George Stone, “National Geographic Traveler” editor in chief, said in a press release. “Few cities exemplify this as does Cleveland, an immigrant-established industrial city that pulsates with creative energy. You can feel this in revived neighborhoods boosted by a Millennial-driven restaurant renaissance, from Tremont’s casual-chic to the brews of Ohio City to the upstarts on East Fourth and Gordon Square. But it’s not just a youthful spark or a fleeting fad. Cleveland takes the best of its structural and cultural heritage (Public Square, for example) and makes it relevant and revelatory for travelers today. We love Cleveland, and I’m not biased, either: I’m from Toledo!”

The selections were divided into three categories: cities, culture and nature. Cleveland was the editors’ No. 3 pick (and the only U.S. location) under the culture umbrella.

The list appears in the December/January 2018 issue of the magazine, which  is now available.

Medina, Portage, Richland, Stark and Summit joined Lake and Lorain counties in the highest level of the color-coded map that determines coronavirus risk. The Ohio Department of Health released the latest data on Thursday during Ohio Gov. Mike DeWine's news conference on COVID-19.

SAN FRANCISCO, Calif. (KRON) -- The Department of Defense on Wednesday released the first images of a COVID-19 vaccination record card and vaccination kits.

The cards will be sent out as part of vaccination kits from Operation Warp Speed, the U.S. government's coronavirus vaccine initiative.

On Thursday, the El Paso City-County Health Department reported 27 deaths to bring its total to 968. Across the border, Juarez recorded 47 fatalities, bringing the tally to 2,160 during the pandemic.

U.S. coronavirus deaths top 3,100 in a single day for the first time

Walmart announces 4th round of cash bonuses for employees

Video: WWII veteran beats COVID-19, gets out of hospital in time for 104th birthday