The group is protesting the latest contract battle with the city of Cleveland. 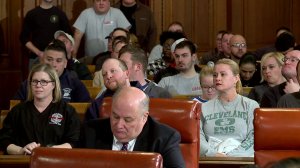 Cleveland Association of Rescue Employees, or CARE Local 1975, said a recent court decision in support of their contract is still not being implemented by the city. According to first responders, Cleveland leaders are fighting against mental health support for the union.

Close to 300 EMS workers and dispatchers have been working without a contract now for three years and nine months. CARE members are still being compensated at 2015 wages and retro pay owed is more than $3 million.

Semi goes off turnpike and into backyard of home in Elyria

ELYRIA, Ohio (WJW) -- A semi truck went off the Ohio Turnpike Wednesday at around noon.

According to the Ohio State Highway Patrol, the truck ended up in the backyard of a home in Elyria.

GRAND MEADOW, Minn.(WXIN) – A beloved school bus driver in Minnesota is being remembered by his community in a very special way. WXIN reports, Glen Paul Davis was a lifelong resident and farmer in Grand Meadow, a town with about 1,140 residents. He died at the age of 88 on February 15. He became a school bus driver for Grand Meadow Schools in 1949, and he drove the bus for…

‘Can’t put a price on that’: Contractors give Maple Heights veteran new roof as small thanks for her service

She spent three years in the military, serving in combat in Mogadishu, Somalia, and specializing in mortuary affairs.

Semi goes off turnpike and into backyard of home in Elyria

‘Can’t put a price on that’: Contractors give Maple Heights veteran new roof as small thanks for her service

St. Jude saves lives. You can help them.