CLEVELAND - It will be another week before the major renovation project of Quicken Loans Arena is approved by Cleveland City Council. 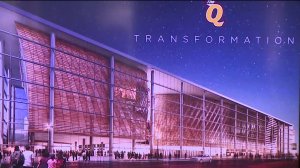 Monday, council had their second reading on the legislation that would fund a portion of the 140 million dollar project.

The project would add a glass enclosure and expand the county owned building.

Funding would be split between the Cavs, Cuyahoga County and the city.

Cuyahoga County Council voted late last month to approve the measure, but city council is taking a little longer. They voted in favor of the legislation tonight, but there were not enough “yes” votes to adopt it as an emergency measure.

Tonight's vote was 11 to 6, but they needed at least 12 “yes” votes for immediate passage. Now, city council will have to have a 3rd and final reading and vote next session.

While it's expected to pass, those against the project are still making their voices heard; saying the money should be used in struggling communities that surround the downtown area.

Cleveland's share of the project would be about 88 million dollars paid over 11 years starting in 2024.

Before today, there have been 11 hours of hearings on this legislation.

The deal commits the Cavaliers to extend its lease at the Q arena to 2034. The portion of admission taxes will be in effect during those years.

Supporters of the project believe the 22-year-old arena – home of the Cavaliers and a venue for popular concerts -- needs upgrades to continue to draw top entertainment acts.

**WARNING: Though vetted, this video may contain words/images which are graphic/explicit in nature. Editors have taken every effort possible to remove all offensive language and/or images.**

BALTIMORE (AP) — Baltimore protesters pulled down a statue of Christopher Columbus and threw it into the city's Inner Harbor on Saturday night.

(WJW) — Ringo Starr is celebrating a milestone birthday this year with a little help from his friends.

Turning 80, the drummer is bringing a celebratory concert to YouTube on Tuesday, and everyone with an internet connection is invited.

Second stimulus check: Where we stand as July begins