CLEVELAND-- The Cleveland Board of Control voted on Wednesday to change the rules for those protesting during the Republican National Convention in July.

The American Civil Liberties Union filed a lawsuit, saying the city's existing regulations unconstitutionally limited the freedom of speech and assembly. The group took its case to a federal judge, who ruled in the ACLU's favor.

“This agreement prevents the 2016 RNC from being defined by an unnecessary conflict between freedom and security,” said Christine Link, executive director for the ACLU of Ohio, in a news release on Wednesday. “The RNC offers a unique stage to groups from all sides of the political spectrum to lift their voices to a national audience. The new rules ensures that people have meaningful opportunities to express themselves on some of our most important national issues."

The board of control changed the route for the so-called protest parades. According to the ACLU, this will make demonstrators more visible.

Below is the new protest route: 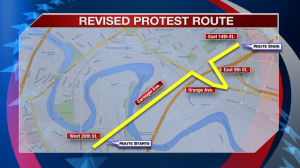 Approved demonstrators will have 50 minutes to walk the route.

COLUMBUS (WCMH) – Two Ohio men have been charged in connection with the insurrection at the Capitol Building in Washington D.C. earlier this month.

According to court documents, Robert Lyon and Dustin Thompson were waiting for an Uber near the Capitol Building shortly after the riots.

The bar, located in Northeast Ohio, was not cited for being open past curfew (which has been extended, as seen in the video above).

Emergency responders were first called to the 100 block of Buckeye Avenue around 6:15 a.m., after a 26-year-old woman was reportedly shot, police said. The victim was taken to a nearby hospital, but her injuries were considered non-life threatening, police said.

Majority of U.S. Catholics say abortion should be legal in most cases, survey shows

Off by one number: Missouri girl inundated with phone calls from Arizonans looking for vaccine

Message in a bottle discovered decades after it floated away