CONNEAUT, Ohio — Authorities say the man wanted in connection with the rape and murder of a 13-month-old Conneaut girl hid in the woods and hitchhiked before he was captured in Pennsylvania.

Joshua Gurto, 37, was taken into custody after he was spotted at a gas station near Pittsburgh Thursday.

KDKA-TV reports Joshua Gurto was captured in Pittsburgh’s Franklin Park section around 1:30 a.m. Friday and was taken to the Allegheny County Jail.

Gurto has been missing since earlier this month.

Authorities at a press conference Friday said he was found with maps of Pennsylvania. They believe he’d been hiding in woods before being picked up by the driver of a pick-up truck in Girard. Police say the truck driver didn’t know that Gurto was wanted.

The truck driver’s vehicle broke down about 20 miles north of Sewickley. Gurto was later arrested. 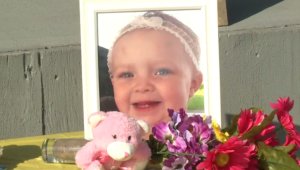 Sereniti Jazzlynn-Sky Blankenship-Sutley, 13 months, died after being found Oct. 7 with blunt force trauma to the head and trunk.

The Conneaut Law Director’s Office filed charges and obtained an arrest warrant for Gurto in Sereniti’s murder and rape. He is believed to be the boyfriend of the baby’s mother.

Conneaut police said Friday that they have dealt with Gurto in the past, but regarding “nothing too serious.”

NEW YORK (AP) — LeBron James was fined $15,000 for an obscene gesture Friday by the NBA, which also warned the Lakers superstar about using profane language.

James made the gesture after making a shot late in Los Angeles' 124-116 overtime victory in Indiana on Wednesday night.

Want to opt out of last Child Tax Credit payment? Time is running out

(WJW) - There's still time to opt-out of this year's last advance Child Tax Credit (CTC) payment, but not much.

The payments give eligible households who opted in up to 50% of the total credit they would get for their child on a tax return in six advance payments.

STRONGSVILLE, Ohio (WJW) — SouthPark Mall in Strongsville was abuzz with shoppers for the unofficial start to the holiday shopping weekend.

"Yeah, I'm looking for Christmas gifts for my wife and my family and actually looking for a pair of boots for myself,” said shopper Matthew Wyman.

Trump says he would easily win GOP nomination in 2024

NWS warns of icy roadways; Another round of snow in forecast

Hundreds of FedEx packages found in the woods

Cleveland Metroparks toboggans back in action

Where can I watch ‘Frosty the Snowman’ tonight?