LONDON, England – Princess Charlotte looks delighted with a cuddly toy dog in a photo taken by her mother, the Duchess of Cambridge.

It’s one of two images of the 6-month-old princess released Sunday by Kensington Palace. 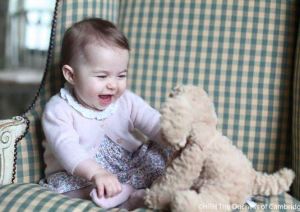 The pictures of Charlotte in a Liberty print dress and pink cardigan were taken earlier this month at Anmer Hall, Prince William and Kate’s country home in eastern England.

The photos were released to thank well-wishers for all the “warm messages about Princess Charlotte” the family has received.

Princess Charlotte Elizabeth Diana was born May 2 and is fourth in to the British throne after Prince Charles, her father Prince William and her 2-year-old brother, Prince George.

MINNEAPOLIS (Reuters) — With the conviction of former Minneapolis police officer Derek Chauvin in the death of George Floyd on Tuesday, prosecutors will begin turning their attention to making their case against three others who took part in the fatal arrest.

Tou Thao, J. Alexander Kueng and Thomas Lane, all of whom were fired and arrested days after Floyd died last May, face charges at a trial on Aug. 23 that they aided and abetted second-degree murder and second-degree manslaughter of Floyd.

CLEVELAND (WJW)-- The Cleveland Divison of Police is asking for the public's help locating a missing 11-year-old boy.

King Buford Robinson is from Atlanta, Georgia, and is staying with his grandmother, according to police.