No section’s per-game season ticket price will go up for the upcoming season. The Browns say this marks the ninth time in the past decade that prices have not increased.

In an email to season ticket members, the Browns, who went 0-16 last season, said, “Last season was difficult for all the members of our team including exceptional season ticket members like you who definitely deserve a winning football team. While we know it can only be proven with results on the field this fall, we are excited to have added many highly-experienced individuals to both our personnel and coaching staff during the past two months, as well as by our significant opportunities to improve our team through free agency, the draft and our offseason workouts.”

**See the entire letter, below**

The team will host 10 games this coming season at FirstEnergy Stadium after playing nine last season.

**More stories on the Cleveland Browns** 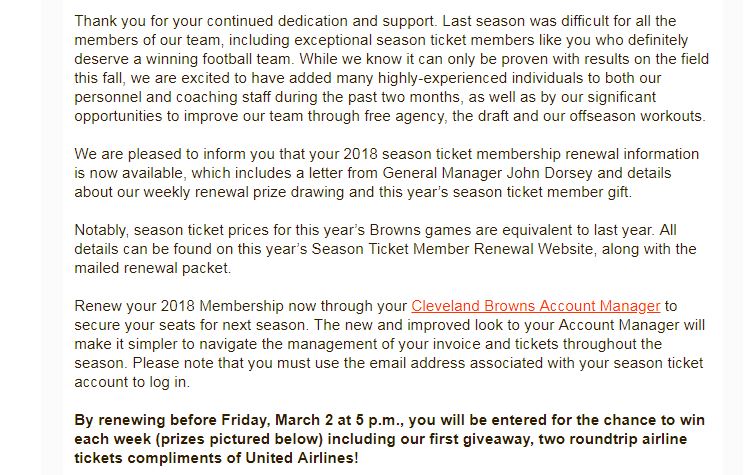 The Ohio Department of Health said there were 33,915 total confirmed and probable cases of COVID-19, and 2,098 deaths in the state. In the last 24 hours, 476 cases, 54 deaths, 111 hospitalizations and 24 intensive care unit admissions were reported to the state health department.

Portman said on the Senate floor Wednesday that as America begins to reopen, it needs a workforce that's ready to step into their old jobs or newly-available jobs.

CONNEAUT LAKE, Penn. (WJW) — Due to the coronavirus pandemic, the amusement park and resort at Conneaut Lake in Pennsylvania will not open this year.

Just a little over an hour and a half drive from Cleveland, the Pennsylvania area is a favorite spot for many Northeast Ohioans, but park officials have decided that the park will not open to the public for the summer.