CLEVELAND– Construction to Quicken Loans Arena along Huron Road is set to begin.

That means barriers around the construction zones will go up Monday at 5 a.m. The barricades will restrict traffic in downtown Cleveland’s Gateway District, a news release from the Q said on Friday.

Huron Road from Ontario Street to East 6th Street will be reduced to two lanes when eastbound lanes closest to the Q are closed for the construction zone. Two open lanes will be split into one eastbound and one westbound during non-event times.

The Huron Road lanes closures are expected to last 18 months.

More information for Q visitors can be found here 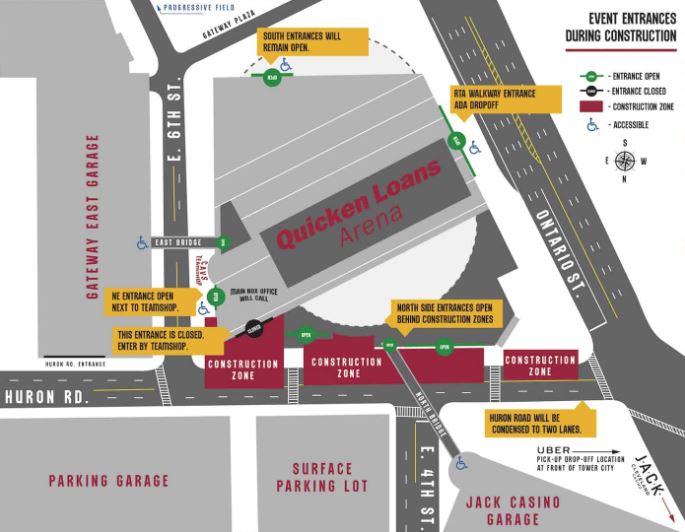 Plans were announced to renovate the home of the Cleveland Cavaliers in December 2016. The Cavs agreed to pay for half of the $140 million project, with the city of Cleveland and Cuyahoga County covering the other portion.

Construction was delayed when community groups pushed for a ballot issue. At one point, the team withdrew its support, saying the referendum attempts made the project unfeasible.

The arena will be closed to event activity during the Cavs off-season in 2018 and 2019 for work to continue. That means no summer concerts and the Cleveland Gladiators, an Arena Football League team, will take a two-year hiatus.

The Cavs said, in September 2019, with the transformation complete, the newly renovated Quicken Loans Arena will re-open for year-round event activity with the start of the Monsters and Cavaliers 2019-2020 seasons.

TRENTON, N.J. (NEXSTAR) — New Jersey made millions of people eligible to get the COVID-19 vaccine, including smokers, a move that prompted gripes about them skipping to the front of the inoculation line.

Beth Kluttz, Cole's only child, confirmed Friday that her mother died of a heart attack at Kluttz's home in Kannapolis, North Carolina, on Jan. 7.