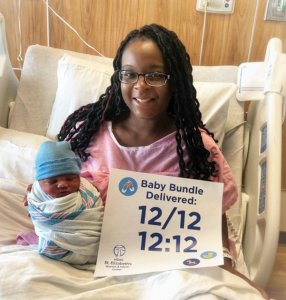 O’FALLON, Ill. (KTVI) – Two amazing things happened just after midnight Thursday morning. The last full moon of the decade and the birth of baby Denarius occurred at 12:12 a.m. on December 12, 2019.

According to KTVI, Denarrika Fisher and Charles Bell of Belleville, Illinois welcomed their baby boy into the world at HSHS St. Elizabeth’s Hospital in the Women and Infants Center.

A statement from the hospital says, “He was originally due on December 30 but decided to come early for this numeric and lunar coincidence.”

Both mother and child are healthy. The hospital says that the nursing staff informed the mother of the notable numeric event.

The final full moon of 2019 and this decade officially occurred on December 12 at 12:12 a.m.  The full moon is called the Cold Moon.

According to the Farmer’s Almanac, the Algonquin tribes of what is now the northern and eastern United States, named the full Moon in December or the last full Moon of the fall season the Cold Moon, due to the long, cold nights.

INDIANAPOLIS (WXIN) – Don and Joyce Hoffman have joined the group of Indiana residents vaccinated against COVID-19 after the virus forced them apart for weeks during the summer of 2020 after Joyce got coronavirus.

The Hoffmans have been married for 67 years.

SANDUSKY, Ohio (WJW) -- Family and friends came together to help surprise a girl with special needs for her 12th birthday.

Onistee's mother, Lexi, said they normally have a big celebration but had to put those plans on hold this year due to the pandemic. So instead, they organized a drive-by parade at their home.

CLEVELAND (WJW) — Cleveland native Drew Carey continues to advocate for his hometown, even from afar.

"The Price is Right" host recently appeared on "Celebrity Wheel of Fortune," winning $55,550 for a local charity, the Greater Cleveland Food Bank.

No incidents reported as armed protesters gather at Ohio Statehouse

3 things Donald Trump may do after leaving office Wednesday

Facebook banning ads for gun accessories until after Inauguration Day

‘It’s like full circle’: Family reunited with dog after 12 years