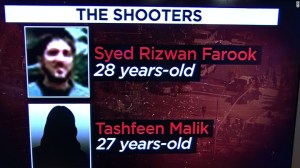 SAN BERNARDINO, Calif. — San Bernardino authorities say the number of those wounded in yesterday’s shooting has risen from 17 to 21.

Authorities addressed the media and gave updates at a press conference Thursday afternoon.

It started as a holiday party — where something prompted Syed Rizwan Farook to storm off angrily.

It ended as a bloodbath; 14 people died. It was the United States’ deadliest mass shooting since Sandy Hook.

At its center were a married couple, Farook and Tashfeen Malik.

Dressed in black, carrying semi-automatic rifles, authorities say that they unleashed a massacre Wednesday at the party hosted by the San Bernardino County, California, health department.

That was their first brazen act. They then led police on a chase, with Farook firing while Malik drove, that ended with their deaths in a hail of bullets.

The city’s police chief said there was a dispute at the holiday party “under circumstances that were described as angry.” Could it have been a workplace dispute? Or was it something more than that, perhaps linked to global terror? At the least, what this couple did, and the firepower they had, suggests that this was planned out.

“We do not know yet why this terrible event occurred,” said President Barack Obama, who noted terrorism and “mixed motives” are possibilities. “… We don’t know, at this point, the extent of their plans. We do not know … their motivations.”

Nor do authorities know of any interaction Farook and Malik had in the past with police. Neither were known to the FBI or on a list of potentially radicalized people, law enforcement officials told CNN.

But it’s all too apparent the pain they caused. San Bernardino Mayor Carey Davis saw it in the eyes of relatives of those killed, whose bodies were still in the Inland Regional Center early Thursday, according to county sheriff’s spokesman Deon Filer.

Davis told CNN, “The desperation and despair that they feel, we feel that for them also.”

Police have not released the names of those who died.

Once again after a mass shooting, Obama appealed Thursday for something to be done to prevent more heartache.

“Right now, it’s too easy,” he said. “We’re going to have to search ourselves as a society … to take basic steps that would make it harder — not impossible, but harder — to let individuals get access to weapons.”

‘People shot. Pray for us’

The nightmare began around 11 a.m. (2 p.m. ET) Wednesday at the Inland Regional Center, a facility for developmentally disabled people in San Bernardino. That’s when Terry Pettit got a text message from his daughter, who was inside.

“Shooting at my work. People shot,” she wrote. “Pray for us. I am locked in an office.”

Around that time, Denise Peraza called her sister Stephanie Baldwin, thinking it might be time to say goodbye.

“As soon as the gunfire started, everyone dropped to the floor and they were underneath desks, and she was trying to shield herself with a chair, along with a man next to her,” Baldwin told CNN affiliate KABC. “Then, all of a sudden, she said she just felt [the bullet] going through her back.”

“I just want to tell you that I love you,” Peraza told Baldwin over the phone through tears.

Within minutes, officers stormed the building searching for an active shooter. They counted the dead — and shuttled the wounded out to triage.

“We had to come out with our hands up and be escorted across the street to the golf course,” a woman who works at the center told KCAL/KCBS.

“We stood there for hours, hours, witnessing clothing of deceased ones on the street, people crying, co-workers crying, us wanting to get to our children.”

Farook and Malik slipped away in a black SUV.

Not for long. Acting on information that quickly pointed police to Farook, they went to his home in the neighboring city of Redlands with a search warrant.

A black SUV drove by them. Slowly at first, then it sped away.

A police car took up pursuit, as the SUV raced back toward San Bernardino. While Malik drove, Farook shot out of the vehicle.

Some 21 officers returned fire. When the SUV came to a halt, it was riddled with bullet holes. The couple inside was dead; their bodies found dressed in “assault-style clothing,” San Bernardino Police Chief Jarrod Burguan said. “Dark kind of tactical gear.”

One officer was wounded, but his injuries were not life-threatening, Burguan said.

In the chaos, police encountered a third person who was running away.

“We do not know if they were involved,” Burguan said. “We have that person detained.”

But they feel confident that there were only two shooters — Farook and Malik.

The husband and wife didn’t leave behind a note at Inland Regional. But they did stash three explosive devices — rigged to a remote-controlled toy car — that didn’t go off.

And in their SUV, authorities found two .223-caliber rifles along with two pistols, which officials said were legally purchased three to four years ago.

Back at Inland Regional, authorities found three rudimentary explosive devices packed with black powder and rigged to a remote-controlled toy car. That remote was found inside the SUV. And in the vehicle was another pipe-like device, but it was not an explosive, Burguan said.

Authorities converged on the couple’s residence in Redlands, looking for any other evidence — more weapons or clues that could shed light on a motive.

The police chief said late Wednesday that terrorism couldn’t be ruled out. He did say that, given everything involved, the attack didn’t appear to be a spur-of-the-moment decision.

“I think, based on what we’ve seen, there was some degree of planning,” Burguan said.

“We don’t have a motive at this point. We are still searching the motive.”

Speaking Thursday from Washington, U.S. Attorney General Loretta Lynch acknowledged that “we don’t know a lot right now. But one thing that’s clear is that violence like this has no place in this country.”

Farook, an American citizen, was an environmental health specialist with the San Bernardino County health department, which was holding the holiday party. He had worked there for five years.

In an online profile, he described himself as a “Muslim Male living in USA/California/riverside” and his family as “Religious but modern.”

He “enjoys working on vintage and modern cars, reads religious books, enjoys eating out sometimes. Enjoys travelling and just hanging out in the back yard doing target practice with his younger sister and friends,” his profile read.

Farook’s brother-in-law Farhan Khan said he was “devastated” by the news.

“I have no idea why he would he do something like this. I have absolutely no idea. I am in shock myself,” Khan said. “I don’t have words to express how sad and how devastated I am.”

Khan said he last talked to Farook a week ago. Farook’s family had tried to reach him all day Wednesday but could not. Hussam Ayloush, the head of the Southern California chapter of the Council of American-Islamic Relations, said Farook and his wife had dropped off their 6-month-old girl with her grandmother and claimed they were going to a doctor’s appointment before the massacre.

“There’s absolutely nothing that could justify (this shooting),” Ayloush told reporters. “And we stand in mourning and sadness for what happened.”

Beth Kluttz, Cole's only child, confirmed Friday that her mother died of a heart attack at Kluttz's home in Kannapolis, North Carolina, on Jan. 7.

** Check out Friday's Cleveland Clinic virtual MLK program in the video above.**

CLEVELAND (WJW) — It’s a day (and month) of reflection, service and education.