CLEVELAND– Law enforcement officials in Cuyahoga County are looking for a couple accused in the death of 4-year-old Eliazar Ruiz.

Joanne Vega, 31, and Romaine Tolbert, 36, were indicted on Jan. 14 and they failed to appear in court for their arraignments.

Landscapers found remains at a house on Longmead Avenue near West 130th Street in Cleveland on Sept. 20, 2017. The skeleton was covered in bags in the backyard. The Cuyahoga County Medical Examiner’s Office said the victim tested positive for several illegal drugs, including fentanyl, and suffered two arm fractures. 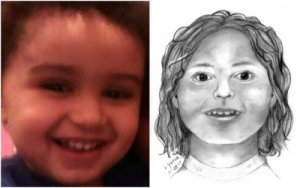 He wasn’t identified until his mother saw a sketch by Dr. Linda Spurlock, a forensic facial reconstruction artist and an assistant professor of anthropology at Kent State University.

That’s when police learned the mother went to prison in 2017 and left Eliazar with Vega, his godmother. DNA confirmed his identity.

The U.S. Marshals Northern Ohio Violent Fugitive Task Force is involved in the search. Investigators said it is believed the couple is still in the Cleveland area.

CLEVELAND, Ohio (WJW) – There are multiple reports Monday that the Big 10 has voted to cancel the 2020 college football season because of the health and safety concerns due to the coronavirus pandemic.

FALLS CHURCH, Va. (AP) — Whether President Donald Trump has the constitutional authority to extend federal unemployment benefits by executive order remains unclear. Equally up in the air is whether states, which are necessary partners in Trump's plan to bypass Congress, will sign on.

Trump announced an executive order Saturday that extends additional unemployment payments of $400 a week to help cushion the economic fallout of the pandemic. Congress had approved payments of $600 a week at the outset of the coronavirus outbreak, but those benefits expired Aug. 1 and Congress has been unable to agree on an extension. Many Republicans have expressed concern that a $600 weekly benefit, on top of existing state benefits, gives people an incentive to stay unemployed.