CLEVELAND, Ohio– The U.S. Marshals Service released on Monday its updated list of the “Dangerous Dozen,” the most-wanted fugitives from northern Ohio. 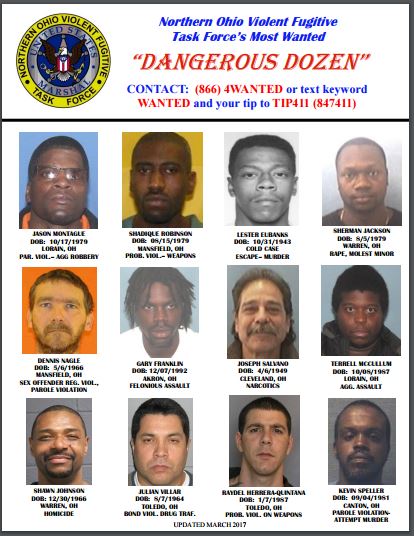 Click here for a larger view of the Dangerous Dozen

Shadique Robinson is a Mansfield-area fugitive wanted for probation violations stemming from a conviction of illegally possessing firearms under disability. Investigators believe he has ties in Mansfield as well as Columbus and Detroit.

Lester Eubanks is a Mansfield-area fugitive wanted for Escape. In November of 1965, authorities say Eubanks raped and murdered a 14-year-old girl in Mansfield when she was walking home from a local laundromat. At the time of the offense, Eubanks was on bond for an attempted rape. Eubanks was convicted of murder and rape and sentenced to the death penalty in May of 1966. In July of 1972 his sentence was commuted to life in prison due to the death penalty being abolished by the Ohio Supreme Court. In December of 1973, Eubanks was taken to a shopping center in South Columbus to partake in a Christmas shopping event hosted by the prison. Eubanks did not return as scheduled after the shopping. An age progressed photo of what Eubanks may look like today is included in his wanted flyer.

Gary Franklin: UPDATE: Franklin turned himself in to police on Wednesday, March 15.Franklin is an Akron-area fugitive wanted for felonious assault. The Northern Ohio Violent Fugitive Task Force began looking for Franklin in November of 2016, when he was charged with Parole Violations. On January 27, 2017, Franklin was charged by the Akron Police Department with Felonious Assault. It is alleged that Franklin was involved in an altercation with another male and Franklin fired multiple shots from a firearm, striking his victim 3 times in the leg.

Terrell McCullum is an Elyria-area fugitive wanted for Aggravated Assault. It is alleged that McCullum and two other masked men committed a home invasion at an apartment on Middle Avenue in Elyria. During the home invasion, multiple shots were fired causing one victim to be transported to a local hospital. McCullum has ties throughout the Lorain and Elyria area.

Kevin Speller is a Canton-area fugitive wanted for a Parole Violation stemming from a conviction of Attempted Murder. He is also wanted for Aggravated Robbery by the Canton Police Department. It is alleged that in October of 2016, Speller robbed his victim, while the victim was withdrawing funds from an ATM machine.

Shawn Johnson is a Warren-area fugitive wanted for Murder. It is alleged that Johnson fatally shot a man on December 2, 2016 at a residence on Stephens Ave in Warren. Johnson has ties throughout the areas of Warren and Youngstown.

The U.S. Marshals Services says none of the fugitives on this list should be approached. If you have any information on the location of a fugitive, please call The Northern Ohio Violent Fugitive Task Force toll free at (866) 4WANTED or text keyword WANTED and your tip to TIP411 (847411).  You remain anonymous and cash rewards are available for information leading to the arrest of any of these fugitives.

Ohio teen serves up meals to hundreds of officers amid protests

COLUMBUS, Ohio (WJW) — One Ohio teen has taken the time to make sure that members of the Columbus Police Department and the Ohio National Guard are getting enough to eat while working during downtown protests.

Markel Davis, a 17-year-old on summer break, has grilled up burgers and hot dogs for hundreds of officers since the protesting began, packaging them and delivering them in person.

CHICAGO (AP) — As damning as video evidence in the George Floyd case appears to be, prosecutors know they must bring the right charges underpinned by sound legal logic if they hope to convict a Minnesota officer in Floyd's May 25 death.

Exhibit No. 1 at trial is likely to be bystander video showing Officer Derek Chauvin pressing his knee into the back of Floyd’s neck as the handcuffed Floyd says he can't breathe. Chauvin held his knee there even after the 46-year-old black man stopped moving.

Happy Dog and The Spotted Owl are two of the best bars in America, Esquire declares

CLEVELAND, Ohio (WJW) — For its Summer 2020 issue, the good people at Esquire magazine have named not one, but two Cleveland drinking holes among the Best Bars in America.

Cleveland's Happy Dog and The Spotted Owl (which does also have an Akron location) were recognized on this year's list, along with Wodka Bar out of Cincinnati and Law Bird from Columbus.

Ohio teen serves up meals to hundreds of officers amid protests

Happy Dog and The Spotted Owl are two of the best bars in America, Esquire declares