CLEVELAND– The man who led authorities on a chase while driving an all-terrain vehicle was sentenced on Thursday. 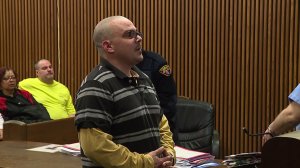 Albert Kelley, 30, of Cleveland, was originally charged with failure to comply and operating an ATV on a public highway. He was convicted of attempt.

On March 20, an Ohio State Highway Patrol trooper spotted Kelley driving his ATV on the shoulder of Interstate 480 near West 130th Street in Cleveland. The patrol said he exited the highway at West 150th Street and the pursuit was terminated as they approached Robinson Jones Elementary School.

The incident was captured on dash camera video.

Kelley was sentenced to 90 days in jail, which was suspended. He was ordered to complete 80 hours of community service and will lose his driver’s license for a year, according to court records.

Kelley admitted to FOX 8 he was the one driving the four-wheeler, but claimed he didn’t know he was being chased by the highway patrol.

“I thought the patrol person was just trying to escort me off the highway and not like pursue,” he said in March.