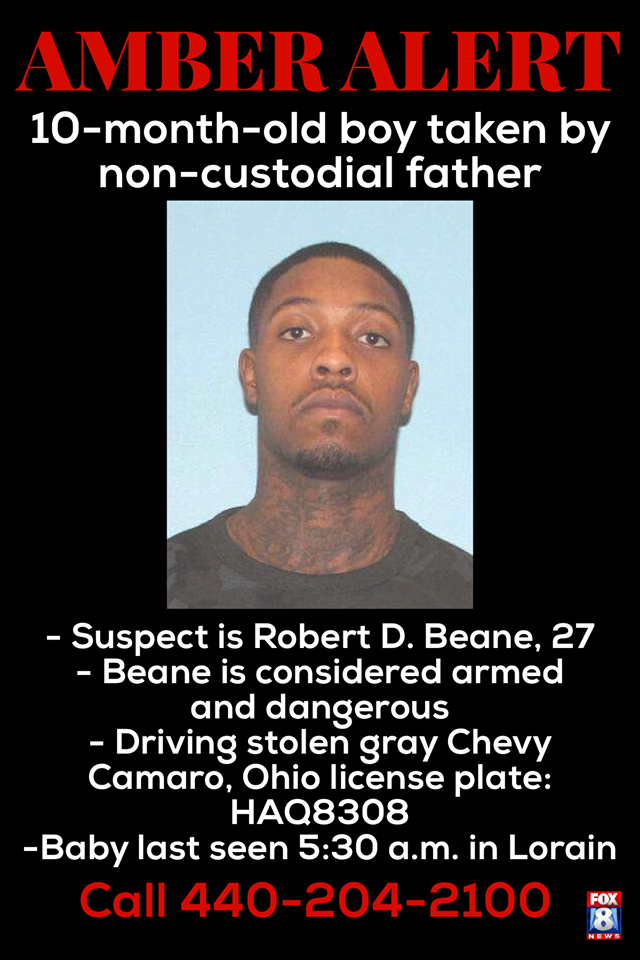 LORAIN, Ohio — The man wanted in an Amber Alert out of Lorain is a wanted fugitive who escaped while on medical furlough from jail earlier this month.

Beane was previously wanted by the United States Marshals Service and the Lorain County Sheriff’s Office for escape. On July 7, Beane was released from jail on a medical furlough to the Elyria Memorial Hospital.

He was ordered to report back to jail upon his release but failed and has not been accounted for since.

Beane was in jail on a robbery charge in which he allegedly pistol-whipped his victim and forced the victim into a trunk of a vehicle. The victim was able to escape and flag down a citizen to call police as Beane fled the scene.

He is described as “extremely dangerous” and is a member of the OBA criminal street gang.

Beane is a black male, standing approximately 5 feet 8 inches and weighing 160 pounds. Beane has ties throughout Lorain and Elyria.

LIVE: Biden to elevate role of science with cabinet picks

(NewsNation Now) — President-elect Joe Biden announced key members of his science team Friday, including pioneering geneticist Eric Lander as the director of the Office of Science and Technology Policy, elevating the post to Cabinet-level status for first time.

Biden nominated Eric Lander, founding director of the Broad Institute of MIT and Harvard, who was the lead author of the first paper announcing the details of the human genome. He is the first life scientist to have that role.

DENVER (KDVR) -- President-elect Joe Biden will take office on Jan. 20, ending one of the most controversial presidency's in history.

Las Thursday morning, President Donald Trump released a statement following the confirmation of votes by Congress after a day when mobs of people flooded the U.S. Capitol.

NEW YORK (AP) — The driver of a New York City bus that plunged off a bridge has been suspended after refusing to submit to a drug and alcohol test, a regional transit agency said Saturday.

The 55-year-old driver has been “withheld from service without pay” following the dramatic crash, the Metropolitan Transportation Authority said Saturday. His name has not been made public.

LIVE: Biden to elevate role of science with cabinet picks

‘This is so crazy’: Mom who had COVID-19 still without taste or smell six months later

Some flurries and light snow showers possible, temps in the 30s