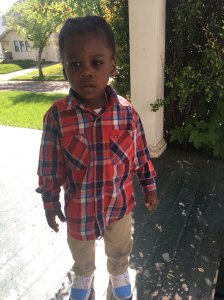 AKRON, Ohio — An Amber Alert has been canceled after a missing one-year-old boy has been found safe.

Police say Darius Heard, Jr. was taken from an apartment on Callis Oval in Akron around 4:30 a.m. Wednesday.

The little boy is 1-year-old. He is two feet tall, weighs 34 pounds, and has black hair and brown eyes. He was last seen wearing a red, white and blue Nautica polo shirt and a diaper.

Police say he was taken “by force” from the apartment by his father, Darius Rashaad Heard, who does not have custody of the boy.

The little boy’s grandmother, Sonya Pittman, said the incident all started at around 1 a.m. after an argument.