NEW YORK – Finding out that someone has bought you a present is almost always awesome. Unless that gift is for your unborn child and you are, as far as you know, not expecting.

Amazon sent out some very confusing emails on Tuesday, telling a large number of customers that someone had bought an item off their baby registry. Many of the recipients did not have a baby registry — let alone a baby gestating or any plans to have or adopt a baby.

“A gift is on the way” read the email, which was impersonally addressed to “Amazon Customer.” The email had a large link inviting the recipient to view their thank you list. For many it redirected them to a page on which they could set up a new registry. Some were taken to a broken link. It’s likely that some of the recipients actually had registries and are now just disappointed that a friend did not in fact buy them something tiny.

The email looked like a phishing email, with a stock-photo baby crawling off the side. However it was in fact from Amazon and none of the links have been found to be suspicious. Some people on social media joked that the retail giant might know more about their reproductive status than they did. 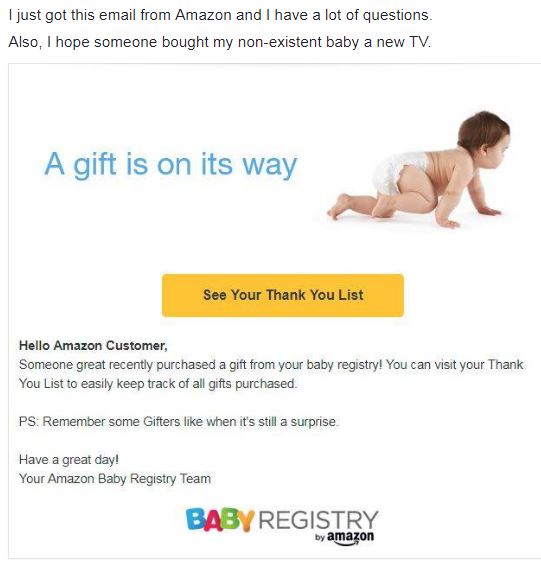 Amazon did not immediately respond to a request for comment, but when one recipient called customer service, the company acknowledged that the emails went out and described it as a “technical issue.”

CLEVELAND (WJW)-- The city is prepared for protests planned in downtown Cleveland this weekend.

The "I Can't Breathe" Justice for George Floyd protest, organized by Black Lives Matter Cleveland, begins at 1:30 p.m. Saturday at the Free Stamp on Lakeside Avenue. Floyd died while in Minneapolis police custody, sparking demonstrations across the country.

A large group marched up and down High and Broad streets while chanting Floyd's name.

Fiery Atlanta rally among US protests of George Floyd death

ATLANTA (AP) — A police car has been set on fire in Atlanta, where protesters were using barricades to break the windows of cruisers while others were jumping on the vehicles and shattering windshields as they demonstrated against the death of George Floyd.

Hundreds of protesters were confronting police outside CNN’s downtown headquarters late Friday. Activists spray-painted a large CNN logo outside the building, breaking a window and tagging doors. One protester climbed on top of the CNN sign and waved a “Black Lives Matter” flag to cheers from the crowd.

Fiery Atlanta rally among US protests of George Floyd death

Fairport Harbor seniors got their own graduation car parade