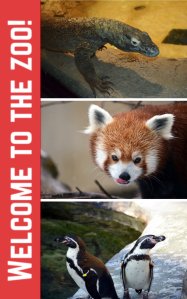 AKRON, Ohio — The Akron Zoo said goodbye to some of its residents — but it’s welcomed a whole new group of animals.

The moves were all based on Species Survival Plan recommendations from the Association of Zoos and Aquariums.

According to a release, the zoo received a new male red panda named Biru. He lives in the zoo’s Asian Trail area and came from the Rosemond Gifford Zoo in Syracuse, New York.

The Akron Zoo’s former red panda, Zheng, is now at the Greenville Zoo in South Carolina. Zheng was paired with a female there as part of a breeding recommendation for the endangered species.

Padar is the zoo’s new male Komodo dragon from the Chattanooga Zoo. He lives in Komodo Kingdom.

Also to the Akron Zoo is a sun bear named Scruffy, from the Cleveland Metroparks Zoo. Scruffy will take up residence in Tiger Valley, where the zoo’s sloth bear had previously been on exhibit.

Lastly new to the Akron Zoo are two new Humboldt penguins, Rocky and Armando, a breeding pair from the Woodland Park Zoo in Seattle. They will join the other eight Humboldt penguins in Penguin Point.

More on the Akron Zoo here.

MINNEAPOLIS (AP) — A man was shot to death as violent protests over the death of a black man in police custody rocked Minneapolis for a second straight night Wednesday, with protesters looting stores near a police precinct and setting fires.

Police said they were investigating the death as a homicide and had a suspect in custody, but were still investigating what led to the shooting.

SAN DIEGO, California -- Most people who break into a bank, do it to get their hands on some money.

A man in San Diego said he did to get his hands on a Hot Pocket.

According to the Ohio Attorney General's Office, Linda Vaughan left her Fairlawn residence on Ridgewood Road around 10:30 a.m. and failed to return.

Protesters assemble across US in name of George Floyd