CLEVELAND, Ohio -- It's the 40th anniversary of the Blizzard of 1978 -- so we asked our viewers: What do you remember?

They didn't disappoint! Hundreds and hundreds of Fox 8 fans answered with fascinating stories from the worst winter storm to ever hit Ohio.

Some were stories of pure survival. Others of leaving Ohio all together right before the blizzard hit. There were a lot of babies born that day, and many a tunnel were dug through the snow for man's best friend.

Below are just some of the stories and photos we received from our viewers. Do you have stories to tell? Head to the bottom of the page for how to share.

"My twin sister and I were born during the blizzard of 1978! Our parents love to tell their story...They recall having so much snow that you could not get out of your driveway. A friend of theirs worked as an EMT and called my mom the Saturday before we were born to tell her "not to go into labor, because we cannot come and get you!" Of course my mom said, "I do not have control over that!" So Tuesday, the 31st was the first day that they were allowing people to drive. My mom was in labor and had heard that they had taken a woman to the hospital via snowmobile and she was like, "there is NO WAY I am going on a snowmobile!" So they got in my dads truck and my dad drove her to the hospital. She recalls feeling EVERY bump along the way! We were born later that evening. Two healthy twin girls. This weekend we will celebrate with family and close friends our 40th birthday! The blizzard of 1978 definitely has meaning to us and our parents!!"

"The one is in front of my parents house on Oakhill Circle (Ashland) where the drift was almost as tall as their house. The other is a felled tree in front of the apartments on Center Street, and the other a plow out on Rt. 42.  If memory serves me correct. My then-boyfriend had moved here from Alaska and had chains for the tires of his truck so he put them on and we went sightseeing and also pulled people out of ditches. I was working at the Lynway at the time...that was one doozy of a storm. Hope to never have to endure one again." 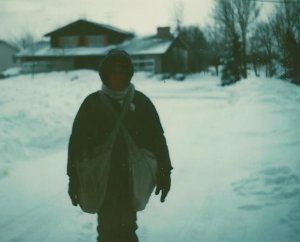 "I was a newspaper carrier for The Morning Journal (then just "The Journal," an afternoon paper) in Lorain during the blizzards of both '77 and '78. Customers were not door-to-door on my route but scattered across two different neighborhoods. Navigating the volumes of snow on foot was bad enough - some houses were nearly inaccessible - let alone the winds and ice. It was cold, visibility was horrible, and it was a challenge to keep the newspapers secure and to not fall. In retrospect, though, what an incredible experience."

"I remember it very much! I checked into Cuyahoga Falls hospital on Jan. 23rd., went into surgery to deliver my daughter the next morning, Jan. 24th., delivered at 11:20 a.m. When I awoke later that day, I tried to call my friends to tell them I had a girl, and couldn't get out on the phone! When I asked the nurse what was up?, she said we were in the middle of a major blizzard! I call her my "blizzard" baby! She turns 40 today, Jan. 24th. !! Happy 40th Birthday Juanita Taylor!

"Yes, I remember! I was 19 years old and a new mother of a month old daughter. My husband was stuck in Wooster, I was at home in an all-electric trailer. Snow was blowing through the walls! I bundled her up in a heavy sleeper. Took one of my bed blankets and folded it so it was about the equivalent of 4 blankets on her took booties put on her hands, hat on her then covered the car bed with a receiving blanket to keep cold air out. Next morning neighbor drove his car up my icy lane and took us to the Amish house behind his. Never so glad to see someone in my life! I'll never forget Andy and Annie!"

"I was located on the tarmac of Hopkins Airport awaiting a departure to Fort Lauderdale, Florida.  We stayed seated for over 2 hours while we awaited the announcement by the captain that we would be taking off.  We eventually arrived in Fort Lauderdale, but the temp was not a warm 75 degrees but more like the 30’s with a brisk wind.  Even though it was unusually cold we made the best of it knowing that it was still better than being up North."

"We were newlyweds & lived in an apartment building on the first floor. We woke up to snow-covered windows, and our front door was blocked with snow. A neighbor from the second floor shoveled away the snow so we could open the door. My husband went outside to the parking lot. The cars were all buried like igloos. He heard a sound coming from around one of the cars and discovered a hole had been dug under it. There was a litter of puppies under the car with one still alive & crying. He brought her in, and we wrapped her in a blanket & put her on a heating pad. I fed her homemade formula from a bottle. After vet care & tender loving care, our Tonya survived the great storm."

"That’s me in the picture. I was 17 and I’m only 5’2”. I couldn’t get my feet all the way down to the surface of the driveway, which is why my head is so high by the window. You can tell by looking at the door the depth of the snow. This was in Lorain."

"I remember my four-year-old brother being ill at home and had to call a rescue squad to get him to hospital. The rescue squad could not reach us. I remember paramedics walking to house and watching my mom and brother being carried through waist deep snow. If I remember correctly, my mom told me eventually they used snow mobiles to get to squad.  He was hospitalized with pneumonia. I was 13 at the time, lived in Crestline, Ohio."

"My parents sent me these pictures when I was stationed in Germany of the Blizzard."

"The blizzard of 78. I was in the Portage Co. jail for a DUI. LOL the roof started to cave in where the heating and air conditioner unit was. So they decided to move a bunch of us up to the Geauga Co. jail. They loaded us up in the back of a canvas top army truck. We were freezing back there and with a police escort and an armed guard in the back with us. We proceeded to go up route 44 all the way to the jail. The drifts were so high we could only see about 6 ft of the top of telephone poles. The wires were laying on the snow drifts. It was that high on both sides of the road most of the way there. It was like going through Antarctica . It took us approximately 4 hours creeping along and sliding around to get there. Once we got there they were really nice to us and treated us to hamburgers, hot dogs french fries and sloppy joes. They felt sorry for us after that ride. LOL we were there for about 2 weeks. I swore I'd never go to jail again and never did. Its been 23 yrs since I last had a drink, lesson learned."

For much more on the Blizzard of 1978, or to share your memories of the winter storm, click here.