CLEVELAND – An email shared on twitter Friday is causing a war of words between the Cleveland Firefighters Union and the Fire Chief.

“It was pretty straight forward. One of the assistant chiefs was asking for a notice to go out for us to wear our commemorative 9/11 shirts which we’ve done for the past 14 years, this year being the 15. It was flatly denied by the Chief,” said local 93 president Tim Corcoran. 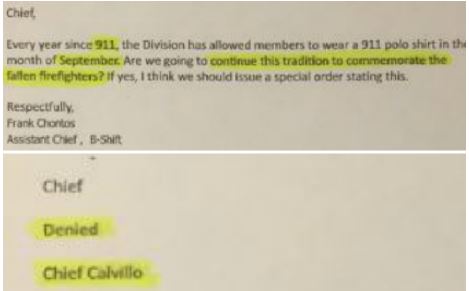 “The guys felt it was unconscionable. We lost 343 brothers that day,” said Corcoran.

“First and foremost, they have not worn polos for 15 years. We do not have any documentation that there was an order approved for them to wear polos,” said Lt. Larry Gray with the Division of Fire.

Lt. Gray says the request was denied because there is a strict uniform and clothing ordinance in place.

“It’s a tradition we’ve done the month of September for the past 14 years,” said Corcoran.

“If you were going to a funeral, you would not want to go to the funeral of a fallen brother in a polo shirt. You want to go in your best attire, your uniform, a Class A uniform,” said Gray.

The chief is asking that all firefighters wear their Class A Uniform at any 9/11 commemoration events this weekend.

Kent State makes masks mandatory at one of its campuses

Kent State makes masks mandatory at one of its campuses