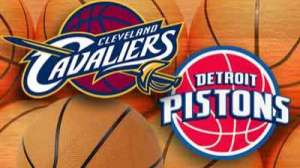 The Cavs avenged a 23-point home loss to Detroit late last month. That game was part of a seven-game winning streak for the Pistons, but now Detroit is struggling to overcome the loss of Brandon Jennings, who ruptured his left Achilles tendon last weekend and will miss the rest of the season.

James fell to the floor near the basket during the final seconds of the third quarter and got up grimacing, apparently concerned about at least one of his wrists. He went to the bench, but only briefly. His two-handed breakaway dunk early in the fourth put Cleveland up 80-68.

The Cavs get right back at it Wednesday night when they take on the Portland Trail Blazers at home.

WASHINGTON – Supreme Court Justice Ruth Bader Ginsburg spoke in the last days before her death about her "fervent" wish that her seat remain unfilled until another president was in office.

Ginsburg died Friday at the age of 87 from complications of metastatic pancreas cancer.

DALLAS — A Dallas school district is investigating a high school English teacher who asked students to write about a modern-day hero and listed the 17-year-old accused of killing two people during Wisconsin protests as one possible option.

Kyle Rittenhouse has been accused of fatally shooting two people and wounding another in Kenosha following the police shooting of Jacob Blake.

WASHINGTON (AP) -- Senate Majority Leader Mitch McConnell says the Senate will vote on President Donald Trump's pick to replace Ruth Bader Ginsburg on the Supreme Court, even though it's an election year.

The Republican Senate leader issued a statement Friday night, about an hour and a half after the Supreme Court announced the liberal justice's death from complications of metastatic pancreatic cancer.

Politicians, dignitaries react to the death of Justice Ginsburg

17 more confirmed cases of COVID-19 reported in City of Cleveland, no new deaths

‘We expect to have enough vaccines for every American by April’: Trump says US will have 100M COVID-19 vaccine doses by year’s end

I-TEAM: Are most students doing their school work now that they’re learning remotely?