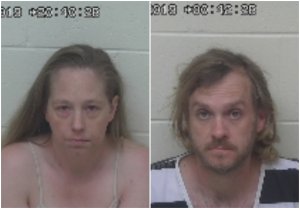 SCIOTO COUNTY, Ohio — The parents of a four-month-old baby have been arrested after the body of their child was found in a 30-foot-deep well.

Jessica D. Groves, 39, and Daniel A. Groves, 41, face charges including of abduction and kidnapping. Authorities say more charges will be presented to the grand jury on a later date.

According to the Scioto County Sheriff’s Office, the baby, Dylan Groves, became legal custody of Scioto County Children Services after he was born because he had illicit drugs in his system. The baby was later placed into the custody of his father. The father, police say, was initially compliant with requirements, but started to miss court dates, home visits and doctor appointments.

On June 10, police were able to secure a search warrant for the parents’ home and property. During the search, detectives found reason to believe that the missing baby had been dead since March.

Jessica was arrested. Daniel, after a six-hour stand-off, was also arrested.

On June 12, police announced that detectives recovered the baby’s body 30 feet deep in the bottom of a well. The body was taken to the Montgomery County Coroner’s Office for an autopsy.

During their search, authorities found several stolen items on the property, including two 4-wheelers, an ATV, two stolen trailers, a riding lawn mower, a camper and other items valued at $42,000.