A professor from South Korea set a world record by drawing 10,000 counts of sea shrimp wishing for World Peace. 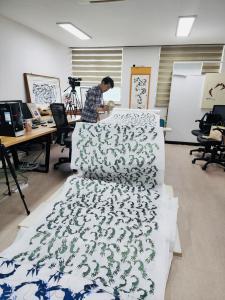 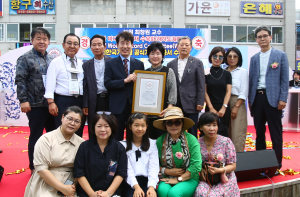 A professor from South Korea set a world record by drawing 10,000 counts of sea shrimp wishing for World Peace.

Choi Chang-won, a professor at Chungwoon University in Korea, worked on his creation for 71 days, from July 1 to September 9, 2022.
In his hands, 50 to 100 sea shrimps were born every day. Sea shrimps in his art range in size from about 5 cm to 30 cm, making them visually appealing.

This massive work of art can be stored semi-permanently by painting it with metallic green (blue) ink wash on a roll of drawing paper 120 cm wide and 100 m long.

Professor Choi Chang-won stated, "It is to emphasize the importance of world peace and the marine environment, to inspire creative pride in the art world as a Korean, and to leave the universal value of Haehado symbolic art as a cultural heritage."

Professor Choi recited the poem 'Haehado' written by Chancellor Wang Ao of China's Ming Dynasty at the certification ceremony to commemorate the 30th anniversary of diplomatic ties between Korea and China, and said, "We will provide an opportunity to share the universal value of art with many people through paintings."