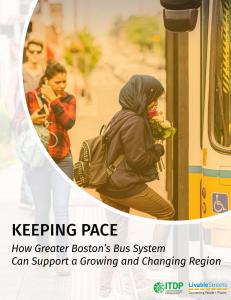 New ITDP, LivableStreets Alliance report shows Boston's bus service has not kept up with surging demand and outlines a timeline to get it back on track by 2030

We have a huge opportunity to invest in better buses to help people get where they need to go, all while boosting the economy, reducing traffic congestion, and tackling climate change.”
— Stacy Thompson, Executive Director of LivableStreets Alliance
BOSTON, MA, UNITED STATES, January 25, 2023 /EINPresswire.com/ -- A report released by LivableStreets Alliance and the Institute for Transportation & Development Policy (ITDP) shows Greater Boston’s population has increased 53% in the last 50 years while the MBTA bus fleet has decreased. The MBTA’s current operating fleet of 1,121 buses is smaller than it was in 1972, when the agency operated 1,200 buses. The report, "Keeping Pace: How Greater Boston’s Bus System Can Support a Growing and Changing Region", outlines a reasonably achievable plan with quick solutions to get the bus system back on track by 2030, only if addressing the funding and the MBTA staffing crisis becomes a top priority.

"Keeping Pace" notes not one player can be accused or fix the problem alone — not the MBTA, the legislature, the city of Boston, nor the 50 other communities served by the bus system — but to fix it, a sense of urgency and a collaborative effort between policymakers across all levels of government are critical for Greater Boston’s bus system to keep pace with the demand. The top and timelier actionable priority outlined in the report is for the legislature to work with Gov. Maura Healey’s administration to provide stable and sufficient financial resources for the MBTA, beginning in 2023.

“Often when people think of the MBTA, they think of the subway or the commuter rail, and they forget that the bus is the system’s workhorse, carrying 300,000 riders every day,” said Stacy Thompson, Executive Director of LivableStreets Alliance. “We have a huge opportunity to invest in better buses to help people get where they need to go, all while boosting the economy, reducing traffic congestion, and tackling climate change. And there has been some progress — when everyone rightfully focused on the Orange Line closures, the MBTA moved forward with the Bus Network Redesign, created more dedicated bus lanes, and revamped bus stops throughout the region to improve bus service. But the MBTA alone cannot fix the bus problem."

Among the findings of Keeping Pace:
- Between 1990 and 2020, cities and towns with MBTA bus service grew in population by 16%. For municipalities with high numbers of bus dependent riders, the growth was more pronounced, with populations growing by 18%.
- Boston has grown by more than 100,000 people, and Cambridge and Somerville by more than 30,000. In all, the core bus service area — cities and towns served by multiple routes and with frequent service — has grown by a quarter of a million people in the past 30 years.
- In the three fastest-growing cities in the MBTA bus service area, where residents depend mostly on buses to access the rest of the transit system, the total population has grown by 42% in 30 years, yet there have been only modest changes to transit service.

“For most people who take it, the bus is more than a service but a lifeline,” said Rev. Myrlande-DesRosiers of the Everett Haitian Community Center. “When there aren’t enough reliable buses, people can’t get to where they need to be — whether that’s to work in the city or other parts of the region, doctor’s appointments, school, and more. That’s why we need buses that meet the needs of riders and their families, who are integral to our economy and that don’t prevent them from continuing with their daily lives and reaching their full potential.”

While systemwide MBTA ridership has yet to recover from the COVID-19 pandemic fully, bus-dependent areas like Chelsea, Lynn, Everett, and Allston now have greater bus ridership than before, underscoring the need for reliable bus service.

“America’s transit systems, especially buses, have been plagued by disinvestment and neglect, worsening our social and racial equity gaps,” said Julia Wallerce, Boston Program Manager, ITDP US. “Greater Boston has taken important steps forward, such as increasing funding for expanded service through the MBTA’s Bus Network Redesign and redesigning streets to prioritize the safety and movement of buses. With additional buses and bus facilities, a larger and stronger workforce, infrastructure improvements, and increased investment, we can support the ongoing and future initiatives the MBTA and municipalities will need for a robust, reliable bus system by 2030.”

"Keeping Pace" outlines an "actionable agenda" for decision-makers at the state, agency, and local levels to enact within the next few years:

- For the Healey-Driscoll Administration and Legislature, suggestions range from providing stable and sufficient funding for the MBTA starting in 2023 and allowing for regional funding of MBTA and other transportation projects to protecting bus priority and preventing vehicle incursions into bus only lanes. Bus service is a major part of the MBTA’s budget, with the FY23 MBTA Operating Budget allocating nearly 2,500 of the 5,641 (45%) total positions to bus operations and maintenance. Therefore, bus service needs to be actively considered in financing conversations for the MBTA.
- For municipalities and state agencies, the report outlines plans to prioritize streets and sidewalks that prioritize both transit and people, improve bus stops and stations, ensure housing and transit are planned together — and includes buses — and more.
- For the MBTA, suggestions range from expansion, improvement, and electrification of the bus fleet and facilities (e.g., investing in a larger bus fleet and new storage and maintenance facilities) and attracting and retaining operators and other employees who support the bus system, to reestablishing an MBTA internal planning department and making bus schedules easy for people to understand.

The report is a call to action to stakeholders at all levels, to work together and prioritize the bus system, and ultimately riders who expect and demand a dramatically improved bus system by 2030.

###
The Institute for Transportation and Development Policy (ITDP) is a global nonprofit that works with cities around the world to design and implement high quality transport systems and policy solutions that make cities more livable, equitable, and sustainable.

The LivableStreets Alliance advocates for innovative and equitable transportation solutions that create safe, affordable and convenient options for everyone in Metro Boston.