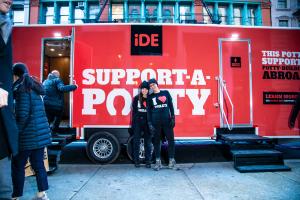 Need a toilet? We got you. On World Toilet Day iDE brings a trailer full of toilets to NYC to raise awareness for global toilet crisis. 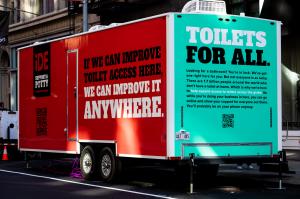 iDE installation tells NYC that half the world doesn’t have a place to go to the bathroom and it’s time to do something about it.

We want everyday Americans to stop and think about how toilets, those things we don’t like to talk about, can save lives and bring dignity to people who don’t have a safe place to go to the bathroom.”
— Elizabeth Ellis, iDE CEO
DENVER, COLORADO, UNITED STATES, November 24, 2022 /EINPresswire.com/ -- An estimated 60,000 people witnessed the unveiling of Support-A-Potty, an installation erected in New York City, which, despite its colorful exterior, raised awareness about the shocking fact that one in two people across the world don’t have a toilet at home.

Marking World Toilet Day, nonprofit iDE brought much needed relief to some 800 New Yorkers who used the eight toilet stalls inside the installation where posters educated the public about the dangers of inadequate sanitation, especially to women and children who live in developing countries.

“It’s hard enough to find a public bathroom on the streets of New York. But can you imagine not even having one in your home?” said iDE CEO Elizabeth Ellis, who was in NYC to unveil the installation this past weekend.

“The terrible truth is that globally, every single day, more than 1,300 children under the age of 5 die from diarrhea-related illnesses, simply because they lack access to toilets.”

Ellis said iDE chose New York as the setting for Support-A-Potty because it is a global melting pot, and a symbol of opportunity for people who strive to make a better life for themselves.

"We want everyday Americans to stop and think about how toilets – you know, those things we don’t like to talk about – can actually save lives and bring dignity to people who don’t have a safe place to go to the bathroom."

On the outside of the installation, designed to make policymakers sit up and take notice, messaging proclaimed, in typical New York style, "If we can improve toilet access here, we can improve it anywhere."

Another said, "Looking for a bathroom? You're in luck. We've got one right here for you. But not everyone is as lucky. There are 4.5 billion people around the world who don't have a toilet at home."

An exterior message really cut to the chase: "So while you're doing your business in here, you can go online and show your support for everyone out there. You'll probably be on your phone anyway."

Conceptualized and executed in partnership with brand marketing accelerator agency Fortnight Collective and The Experiential Group (Production), the installation was parked in Soho, where thousands of pedestrians and motorists got to see it.

Outside the installation, iDE staff gave away T-shirts and conducted interviews with Support-A-Potty users, who can relate to poor sanitation access as they live in a city infamous for its lack of public restrooms. Dozens of toilet users expressed surprise after reading the dire statistics inside the toilet stalls.

Ellis said iDE’s market-based approach to ending poverty included working in countries like Ethiopia, Cambodia, Ghana and Bangladesh, where we have powered entrepreneurs to market toilets and improve access to sanitation.

Says Anna Delaney, Art Director at Fortnight Collective, “We wanted to call out the lack of toilet access in the world in a place where people would understand what it was like to not be able to find a bathroom: NYC.”

"The United Nations recognizes November 19 as World Toilet Day each year as a day to highlight the inequities in toilet access around the world," says Katherine Koch, VP Global Communications & Marketing. "iDE believes that toilet access is a basic human right, and this day serves as the perfect platform to champion this right."

About iDE
iDE is a non-government organization dedicated to ending poverty. Based in Denver, Colorado, our work within agriculture, sanitation, climate change resilience, and gender equality, stands out in the international development sector because we don’t simply hand out money or commodities. Instead, iDE believes in powering small-scale entrepreneurs and building robust market ecosystems that are financially competitive, resilient to changing climates, and inclusive of marginalized people. iDE has 1,388 global staff and offices in 10 developing countries. Learn more at iDEGlobal.org.

About Fortnight Collective
Fortnight Collective is a full-service independent brand marketing accelerator that is focused on helping brands be better, faster. With its unique BrandHack™ process, Fortnight Collective liberates the strategic and creative development process. From three-day sprints to two-week hacks to AOR relationships, Fortnight puts the right talent around the table at the right time to accelerate brand momentum for marketers. Fortnight Collective has been recognized by Adweek as a “Fastest Growing Agency” for the last three years and a “Best Place to Work” for the last two years by Outside Magazine. Based in Boulder, Colorado, and with outposts in NYC and London, clients include Noodles & Company, People, Crocs, Vrbo, Expedia Group, ONE Brands, Steamboat Ski & Resort Corporation, Odell Brewing, Mondelez, Mortal Kombucha and more. For more information, visit fortnightcollective.com.