TORONTO, Sept. 27, 2022 /PRNewswire/ -- Cinespace Studios (Cinespace), a global platform of production facilities, announced today the expansion of its Marine Terminal Studio Hub with the signing of a second long-term lease with PortsToronto. The lease comes at the conclusion of an open, multi-year Request for Interest (RFI) process and a subsequent Request for Proposal process that commenced in 2019. Located in Toronto's Port Lands, the redevelopment of Marine Terminal 52 will create three production stages and support spaces totaling 130,000 square feet to welcome world-class productions in 2023. Global architecture, design and planning firm Gensler has been selected to design the studio. 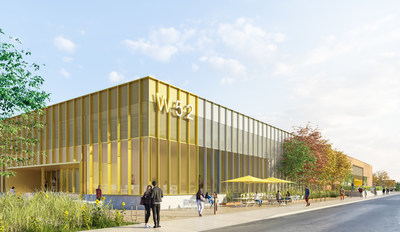 Cinespace is the largest studio facility in Toronto with 1.3 million square feet of production space totaling 25 stages over three sites. This upcoming expansion in the heart of the city's Studio District follows Cinespace's successful development of Marine Terminal 51, which currently hosts Netflix's production hub and was recently the home to Guillermo Del Toro's Nightmare Alley. The redevelopment of the site will create over 300 new jobs in Toronto and continues to support the infrastructure in Ontario that generates more than 48,000 jobs per year and $2.88B in direct spend.

"We are proud to continue our investment in Toronto that started over 30 years ago. It's a privilege to partner with PortsToronto again and be selected to develop Terminal 52 into a second facility that will meet the increased demand for production infrastructure," said Ashley Rice, President and Co-Managing Partner, Cinespace Studios. "The Marine Terminal Studio Hub is an integral part of the Port Lands' revitalization and its future as a creative center for the city and the province."

"Our goal for this development was to identify opportunities to develop the existing land and deliver maximum benefit in the area, including greater support for the growing employment district that has emerged in the Port Lands. Cinespace Studios' development allow for the area to remain consistent with the activities of a successful and operational port, as this remains PortsToronto's single priority in the area given the economic impact of the port for both commercial shipping and cruise ship operations," said RJ Steenstra, President and Chief Executive Officer, PortsToronto.

The Honourable Doug Ford, Premier of Ontario commented: "Ontario is open for business, and with the ongoing commitment of key players like Cinespace Studios, our economy will continue to grow. Last year, Ontario saw $2.88 billion spent on production here in the province, which was the highest amount in our history. Going forward, we remain fully committed to growing the industry and creating the conditions for thousands more production jobs to be filled by Ontario's skilled workers."

Mayor John Tory, City of Toronto continued: "The film and television production industry in Toronto is important to the local economy, the creation of jobs, and the culture of our city. I am pleased that PortsToronto and Cinespace will be expanding their already successful infrastructure in the Port Lands by creating a second studio space for productions to use. Toronto's screen industries have experienced a period of significant growth and investment over the last decade, and we know that there has been a real need for even more studio space. This project will not only help us attract more projects and more people to our city but as a result add more jobs which is good for our city and good for the economy."

Toronto City Councillor Paula Fletcher, said: "I have long been an advocate for the importance of this industry and the associated benefits that come from having a strong media and cultural sector in the City of Toronto. The partnership between PortsToronto and Cinespace has already yielded a successful studio in the former Marine Terminal 51, that has since become a hub for Netflix. I look forward to the development of a second studio space in the Marine Terminal 52, and the related streetscape improvements, economic impacts, and jobs that result from investment in this important industry."

Angela Mastronardi, President, IATSE 873, said: "We congratulate Cinespace Studios on their expansion with PortsToronto in the Studio District. This new studio infrastructure is a welcome addition to the city that will bring an increase in productions and, in turn, opportunities for our skilled motion picture technicians."

Cinespace Studios is a best-in-class global platform of production facilities that supports content providers and their creatives. The platform is one of the largest sound stage operators globally with locations in Chicago, Toronto, and Studio Babelsberg in Germany. Cinespace Studios delivers the highest level of service while increasing the quality of the overall production experience and nurtures its local communities to support workforce development and crew diversity.

For more than 100 years PortsToronto has worked with its partners at the federal, provincial and municipal levels to enhance the economic growth of the City of Toronto and the Greater Toronto Area. PortsToronto owns and operates Billy Bishop Toronto City Airport, which welcomed approximately 2.8 million passengers in 2019; the Outer Harbour Marina, one of Canada's largest freshwater marinas; and, Marine Terminal 52, which provides transportation, distribution, storage and container services to businesses at the Port of Toronto. PortsToronto is committed to fostering strong, healthy and sustainable communities and has invested more than $12 million since 2009 in charitable initiatives and environmental programs that benefit communities along Toronto's waterfront and beyond. PortsToronto operates in accordance with the Canada Marine Act and is guided by a board with representation from all three levels of government.