Old revolutionary base in Jiangxi takes on new look

Located in a remote mountainous area near Jiangxi's border with Hunan province, Jinggangshan is a well-known Red tourism destination in Ji'an city, Jiangxi province. Though it is also known as the cradle of the Chinese revolution, its remote location impeded its development as time passed.

In recent years, Jinggangshan has made good use of its historical resources to promote the local economy, such as Red tourism, modern industries, and modern agriculture. Thanks to the local government's efforts, the city was removed from the poverty list in February 2017, becoming one of the first county-level cities in the nation to be removed.

Red tourism has become increasingly popular recently, and Jinggangshan has made use of its Red tourism and natural ecological resources to build tourism brands and promote rural vitalization.

Villagers in Shenshan village in Maoping town, Jinggangshan have tasted sweet success thanks to the local government's targeted poverty relief projects. In 2016, the village launched a project to build a beautiful countryside and develop rural tourism, and currently, it has been transformed from a poverty-stricken mountain village into a beautiful place full of life and vitality. 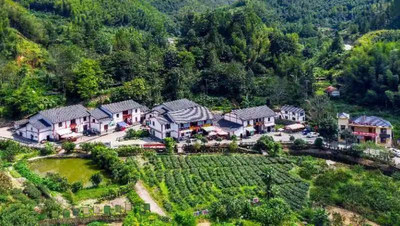 Relying on the industrial advantages of Ji'an, Jinggangshan has attached importance to developing digital information, new materials, and biomedicine industries.

In recent years, Jinggangshan National Economic and Technological Development Zone has accelerated its pace in developing the digital economy. Efforts have also been paid to facilitate the development of LED lighting, and intelligent hardware industries, as well as the intelligent terminals of the internet of things.

The zone has also been advancing its innovation-driven development strategy, focusing on cultivating high-level talent in the digital industry, and enhancing cooperation with scientific research institutions. According to official data, the business revenue of the zone's digital economy reached 46.6 billion yuan in 2021, which accounted for 43 percent of its total revenue.