ORLANDO, Florida. , May 26, 2022 /PRNewswire/ -- NewsBlaze is excited to announce the release of NewsBlaze writer and editor Ernest Dempsey's first solo Hail To My Fairyland. The song was released via the popular online music distributor CD Baby on Monday, May 23, 2022. 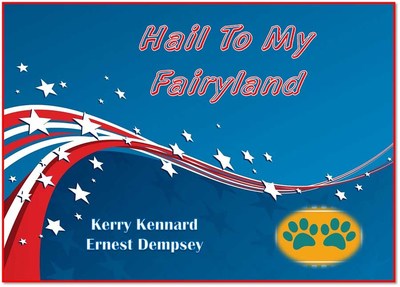 Hail To My Fairyland, goes back to late 2016 when Ernest Dempsey came up with the lyrics and musical concept, melody and rhythm, for a song that celebrates America and being American. While the production of the song was delayed for two years due to the COVID-19 crisis, it eventually attracted the attention of Ohio-based musician Kerry Kennard, who at the time was interested in doing some song for any movie.

Taking up Dempsey's concept and lyrics in late 2021, Kennard created a mix of styles to compose the music and also hunted voice talent to sing the song. Thus the emerging singer Anna was recruited to lend her vocals to the project. In the creative work on the song, Kennard tried something new.

"It is my first time writing a melody for voice, instead of instruments," he tells about the process of developing music for Dempsey's song. "While most of my instrumentals have contemporary arrangements, this song has a more predicable chord progression."

Hail To My Fairyland celebrates America and its timeless values of justice, love, and liberty. Patriotic in spirit and upbeat in mood, this song creates a theatrical experience with harmony of different styles, both traditional and contemporary.

"This is a landmark in my creative journey," says Dempsey about his first song going into production. "Since starting Twin Paws Productions, creating some music was on my mind and of my written songs, I felt Hail To My Fairyland was the perfect one." Dempsey says he also has plans for a video version of the song.

Listeners can stream Hail To My Fairyland on any of their favorite music streaming services off the HearNow page of the song.

"We are pleased to support the excellent work of Ernest Dempsey and Kenny Kennard with Hail To My Fairyland, their first production together," said Alan Cray, NewsBlaze CEO.

Ernest Dempsey has been a NewsBlaze contributor since 2008. In 2010 he was awarded the Outstanding Writer Achievement Award by NewsBlaze for contributing thorough and insightful articles, essays, reviews, and interviews. He continues to contribute to NewsBlaze while also offering critical commentary on current affairs as well as analyzing important news in science, environment, education, and other fields at various media outlets. He recently launched the film and music company Twin Paws Productions to pursue creative work in the entertainment field.

Kerry Kennard been active in the world of music since 1984. He has performed for theatre shows, bands for rock, jazz, R & B, Circus (Great Wallendas), swing bands, American Entertainment Productions show band (One year), and also performed with Holland America Cruise Line for three years. Recently, he has performed musicals at Sinclair College, jazz bands, as well as Church music. Before earning a Master's in Jazz at the University of Arkansas and training at the Eastman School of Music in Creative Music Making and African drum studies, Kennard received a Bachelor of Music in Percussion Performance at Belmont University. He has been teaching since 2004, both privately and for local studios, offering all styles in music. Visit him online at https://www.kerrykennard.com/.

NewsBlaze was founded in 2004 as an independent online newspaper and information portal, forming relationships with other publishers and wire services. NewsBlaze covers broad topics of interest to readers worldwide, which has helped build a loyal, global following of readers.

As the lead Syndicate Partner of the World City Press Network, NewsBlaze provides news, editing and content services for publishers and agencies. NewsBlaze supports publicists and PR agencies with coverage of their interesting clients. Connect with NewsBlaze.com to learn more.