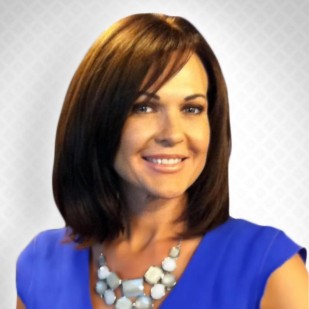 Emily is a curious, creative type. That’s probably why she ended up as a reporter. This way she gets to ask those sometimes awkward questions and no one looks at her funny – it’s her job.

Her creativity helps her to see a story from many different angles and bring it to life on the small screen.

Her stories have promoted significant changes in the legal system.

California Governor, Arnold Schwarzenegger, took action after Emily revealed the public was never notified when a paroled sex offender went off his or her GPS monitoring device and was on the run in the community.

As a direct result of Emily’s story, Schwarzenegger issued an order to the California Department of Corrections and Rehabilitation, mandating they create a public alert system with photos of the wanted predators.

Emily is not afraid to rough it either. She covered hurricane Katrina in 2005 and lived out of a car for a week.

She gathered news during the day and reported live via satellite in the evening, as the city of New Orleans lay submerged under the deadly toxic water and crime in the streets ran rampant.

Emily doesn’t like to take herself or life too seriously. She finds time to report on really important things, such as the ransom kidnapping of a Bob’s Big Boy statue. Luckily, Big Boy was returned with only minor scratches.

Before moving to Cleveland, Emily reported in Bakersfield, California for ten years at both KGET ( NBC) and KERO (ABC).

She has spent most of her life living in Los Angeles and Orange County, except for a few years in Arizona and Washington, DC. Emily started her broadcast reporting career in 1999 at News 21 in Rockville, Maryland.

She has been nominated for two regional news Emmy Awards.