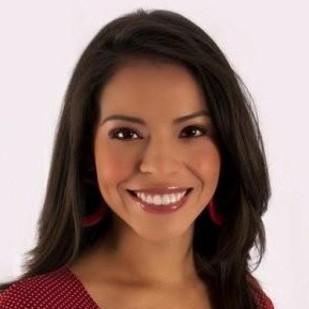 Before arriving in Cleveland, Angelica worked at Accuweather where she gained experience covering weather across the nation, and throughout much of the globe. She provided forecasts on TV and radio for numerous AccuWeather clients.

She also appeared on national networks such as Fox Business, Fox News, Bloomberg, and ABC World. Reporters from ABC News and CBS News have interviewed Angelica about winter storms, severe weather, and hurricanes. In addition, Angelica has done the weather in Spanish for TV stations in Puerto Rico, Mexico, and several Univision stations in California.

Campos holds a Bachelor of Science degree in Geosciences and Broadcast Meteorology from Mississippi State University, and a degree in Mass Communications from the University of West Georgia. She is also a member of the National Weather Association.

Angelica was born in the tropical city of San Jose, Costa Rica. Angelica fell in love with weather and the ever changing conditions across the USA; after her first winter in 1999 and experiencing an ice storm.

She considers Cleveland the perfect weather lab. A great place for any meteorologist, given the complex weather patterns, lake effect, and its unique seasons.

Angelica likes to stay active and loves to workout. She is an avid runner, and triathlete. Her motto is everyday of life presents a new opportunity to better than the day before. She has competed in obstacle races, crossfit challenges. She is also an NPC (National Physique Committee) athlete. She loves trying new things and giving back.

Angelica was named one of Cleveland’s most interesting people on 2011. Kaleidoscope Magazine has also inducted her into its Forty/Forty Club, which recognizes Clevelanders under the age of 40 who are making a difference. In March 2012, Campos was featured on the cover of the Latinos Magazine NE Ohio edition. The first local celebrity to grace the cover of the magazine.